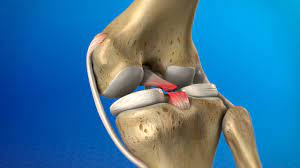 Compared with the ACL, (anatomically) the PCL is much wider and stiffer. The primary function of the ligament is to prevent posterior translation of the tibia relative to the femur – but it also restrains tibial external rotation as well as varus and valgus stress. When a player injuries their PCL they are generally able to return to football without surgery. This is in contrast to injuries to the ACL where surgical management is generally needed.

Injury to the PCL is most commonly associated with high-energy trauma but is also seen in football. The most common mechanism is after a fall onto a flexed knee. It can also occur after hyperextension and hyper-flexion injuries. More chronic injuries typically cause pain rather than instability. It is not common for the athlete to report an associated popping or snapping or significant swelling (unlike ACL injuries).

There are two major tests described to assess the integrity of the posterior cruciate ligament. These should be done along with a comprehensive knee examination. The two most widely described tests are the posterior draw and posterior sag tests.