The following are two recent BFR studies that got my attention. Especially the intervention programmes that easily can be implemented in your clinical practise. 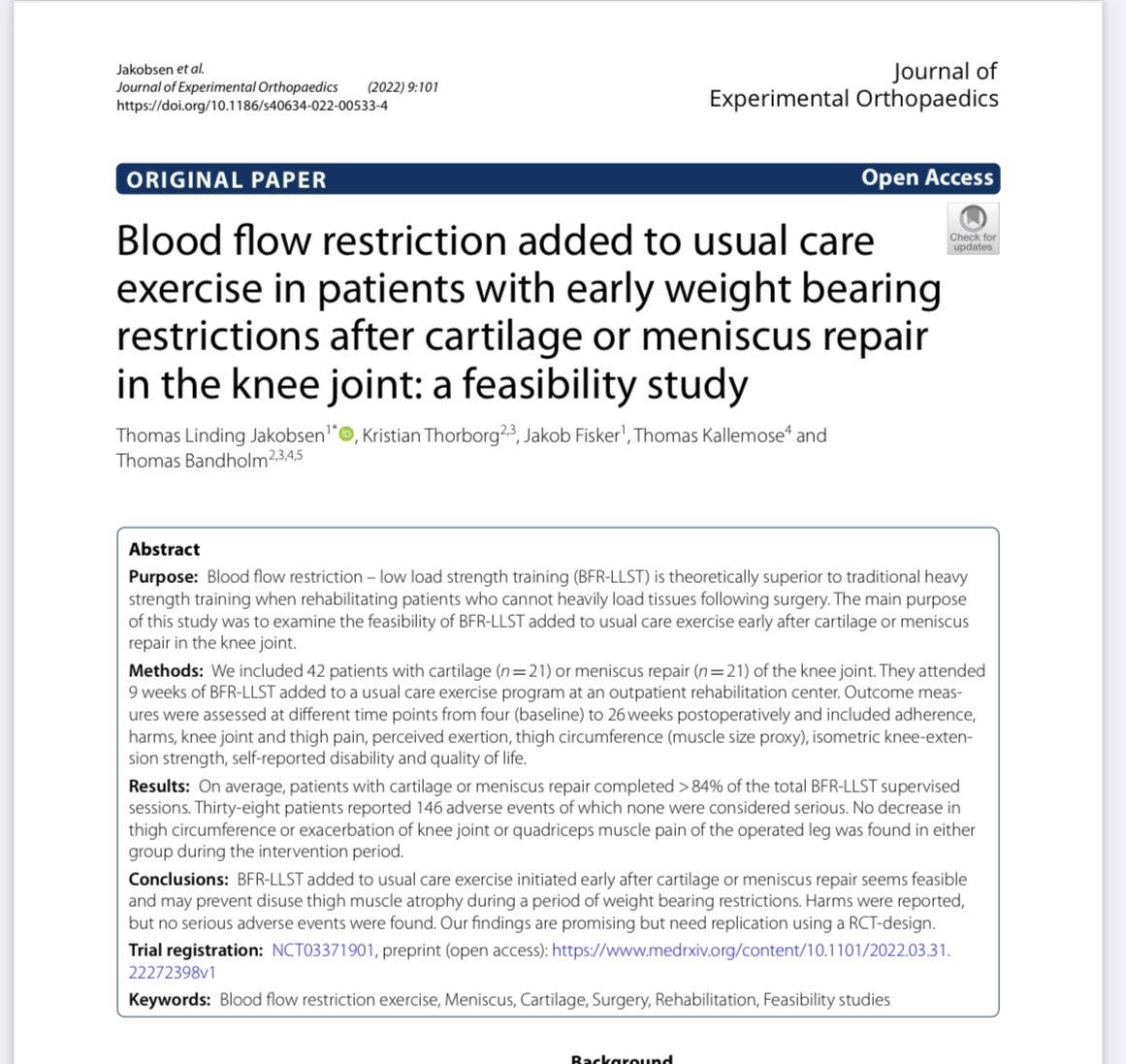 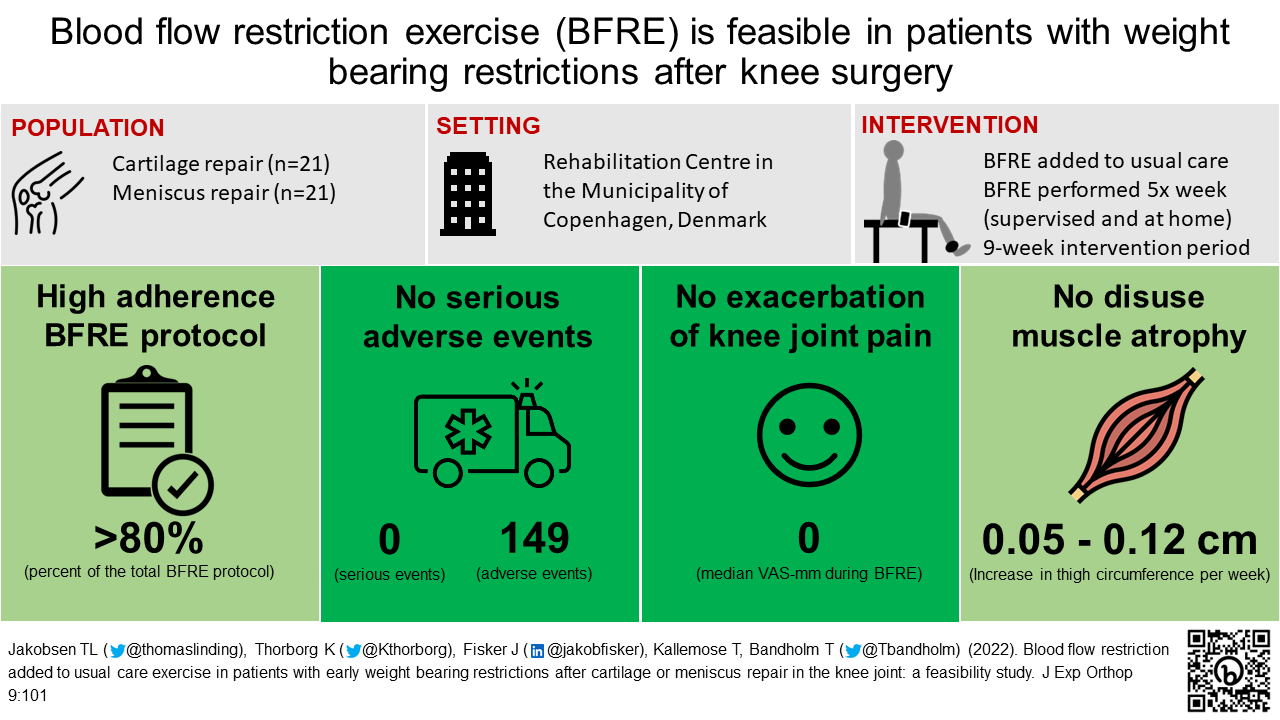 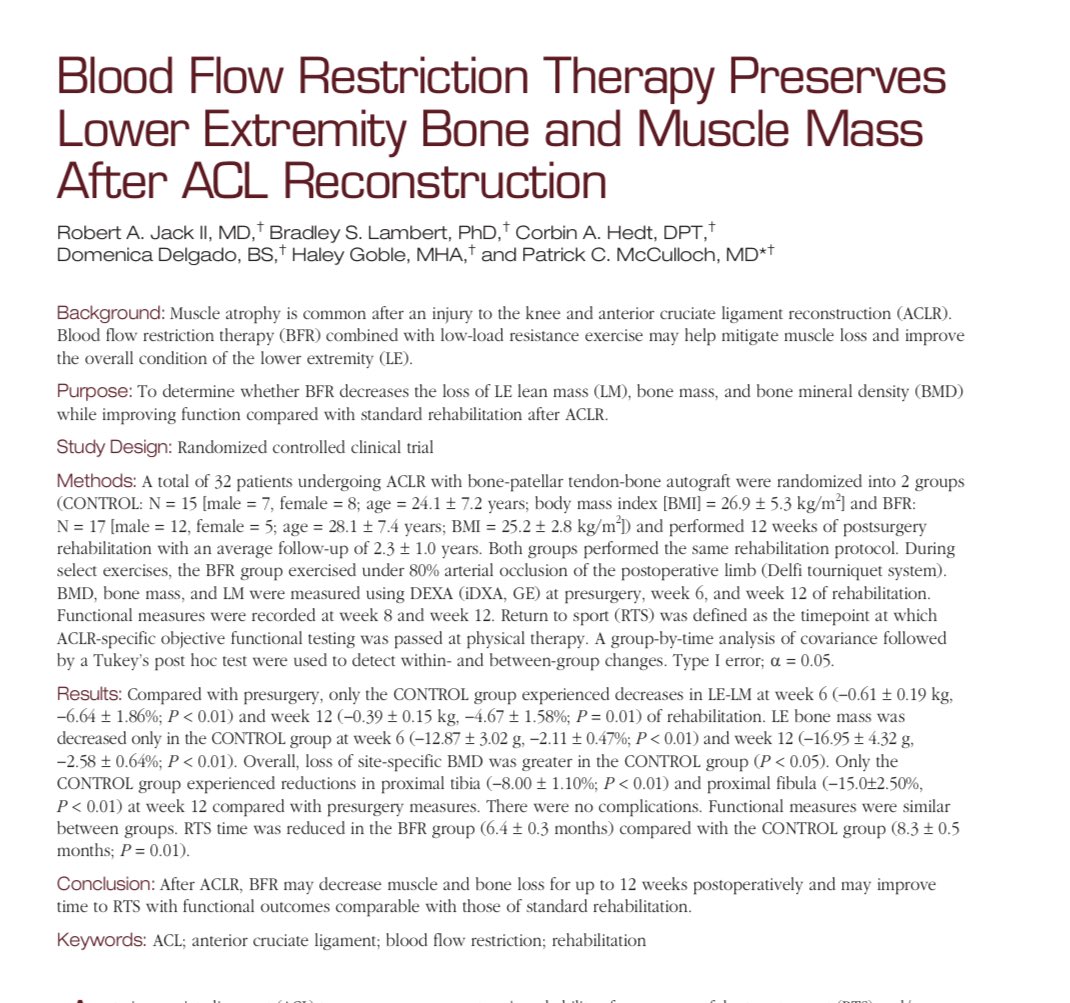 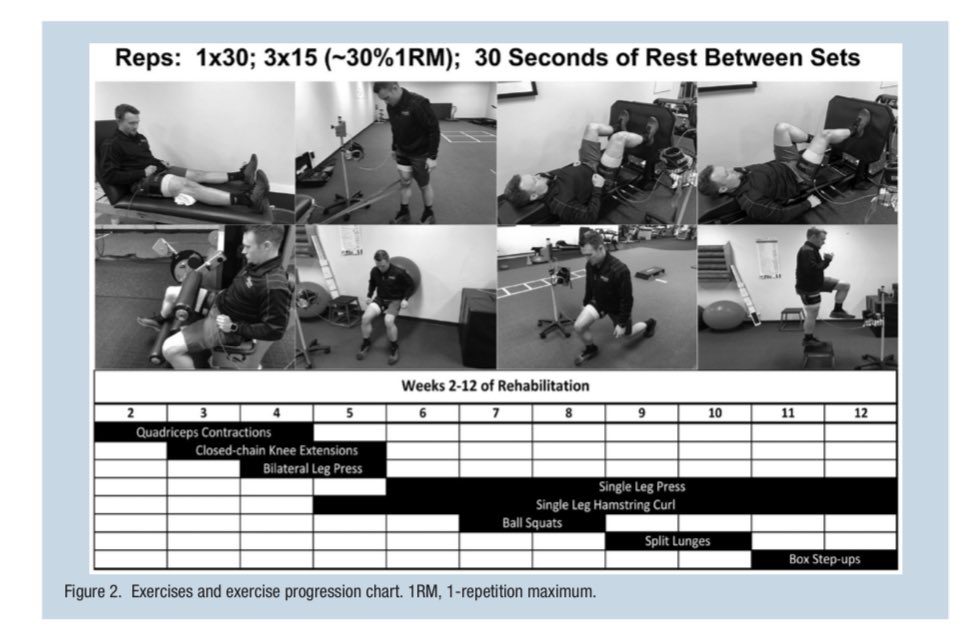 Prue J, Roman DP, Giampetruzzi NG, Fredericks A, Lolic A, Crepeau A, Pace JL, Weaver AP. Side Effects and Patient Tolerance with the Use of Blood Flow Restriction Training after ACL Reconstruction in Adolescents: A Pilot Study. Int J Sports Phys Ther. 2022 BFR after ACLR (day 😎 on adolescents (15y, with the youngest 12y). Very small percentages of dizziness and itchiness. Some drop outs, but in my opinion because of the 80% LOP used. I think it could be too high directly post op

In this BFR after ACLR on adolescents (15y, with the youngest 12y). Very small percentages experience dizziness and itchiness. Some drop outs. But in my opinion, this can be because of the 80% LOP used. I think it could be too high directly post op were graded higher LOP would be recommended. 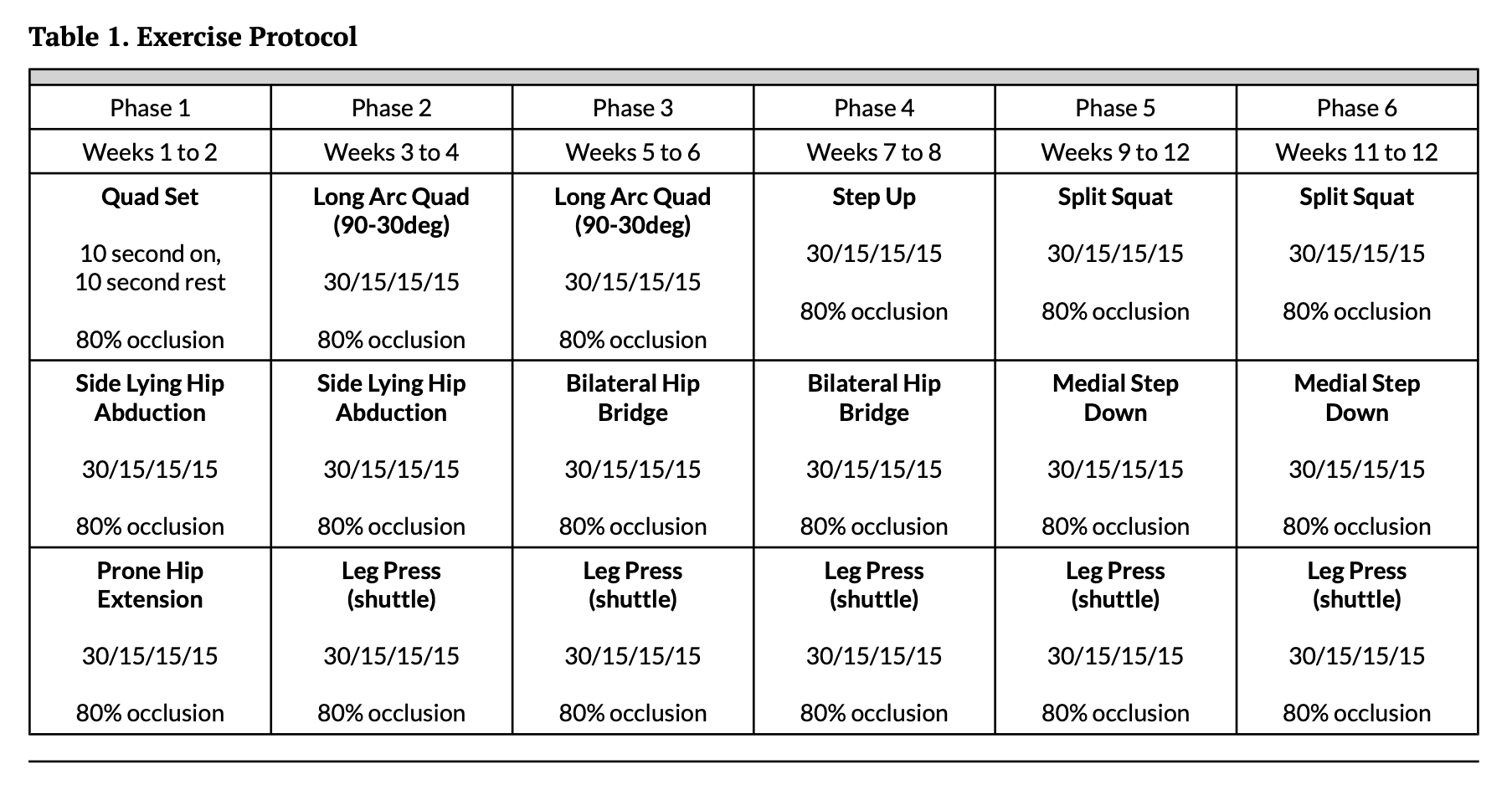 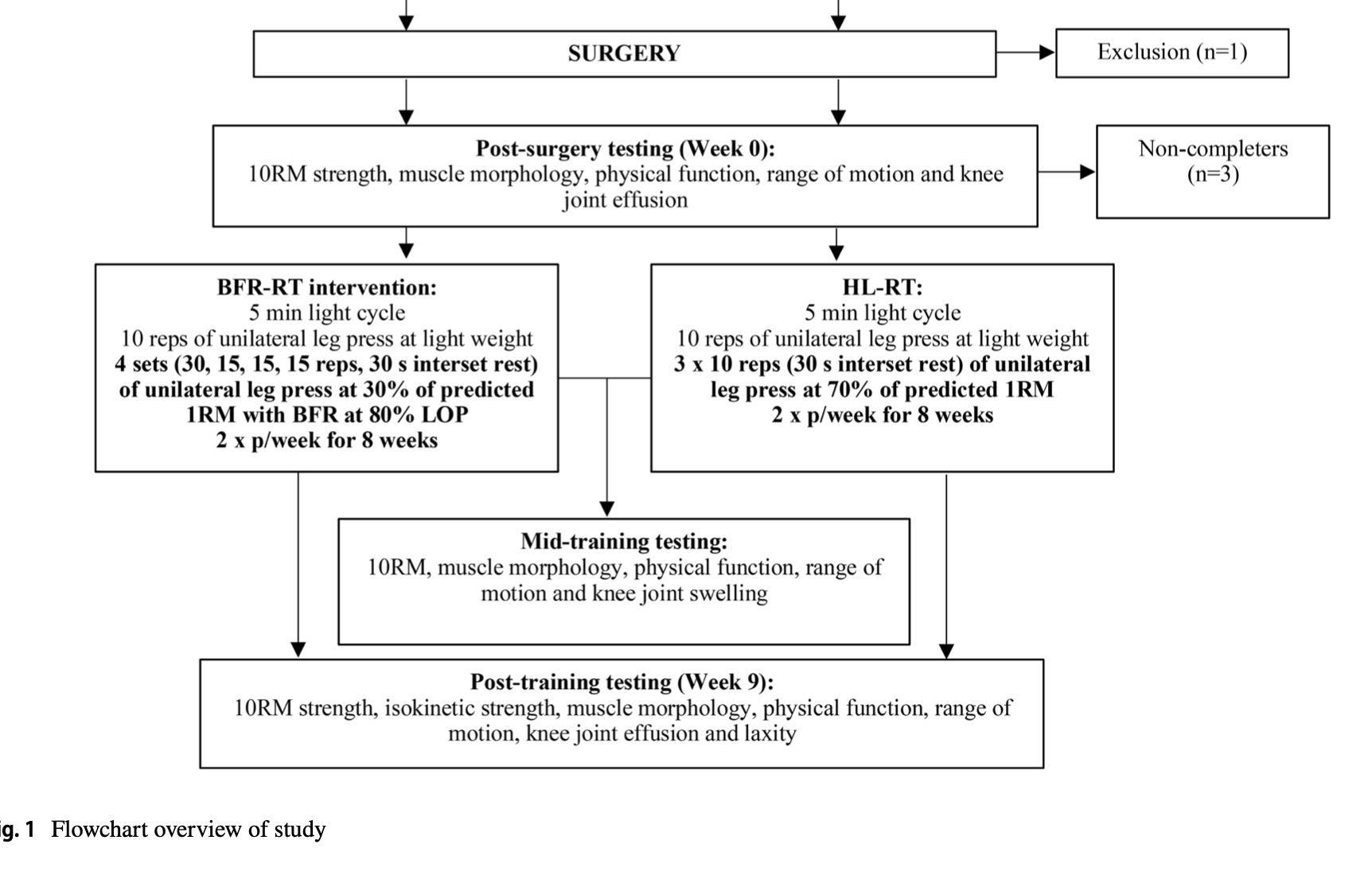 Hughes and colleagues compared heavy load resistance training (HLRT) with BFR training post ACL rehab which begin in week 3 post op when sutures has been removed and clearance had been given by the surgeon. Both groups had an 8 week progressive overload program using only the single leg leg press machine 2x/week. The difference was in the loading parameters: BFR – 4 sets (30 reps, 15 reps, 15 reps, 15 reps) at 30% 1RM: 30 seconds rest between sets HLRT – 3 sets 10 reps at 70% 1RM: 30 seconds rest between sets. In addition to the program a standardised home rehab program was given 3x/week. Both groups found significant improvements in strength and hypertrophy. The difference was seen in pain, effusion and range of motion in which those who used BFR saw significantly greater improvements than those who used HLRT.