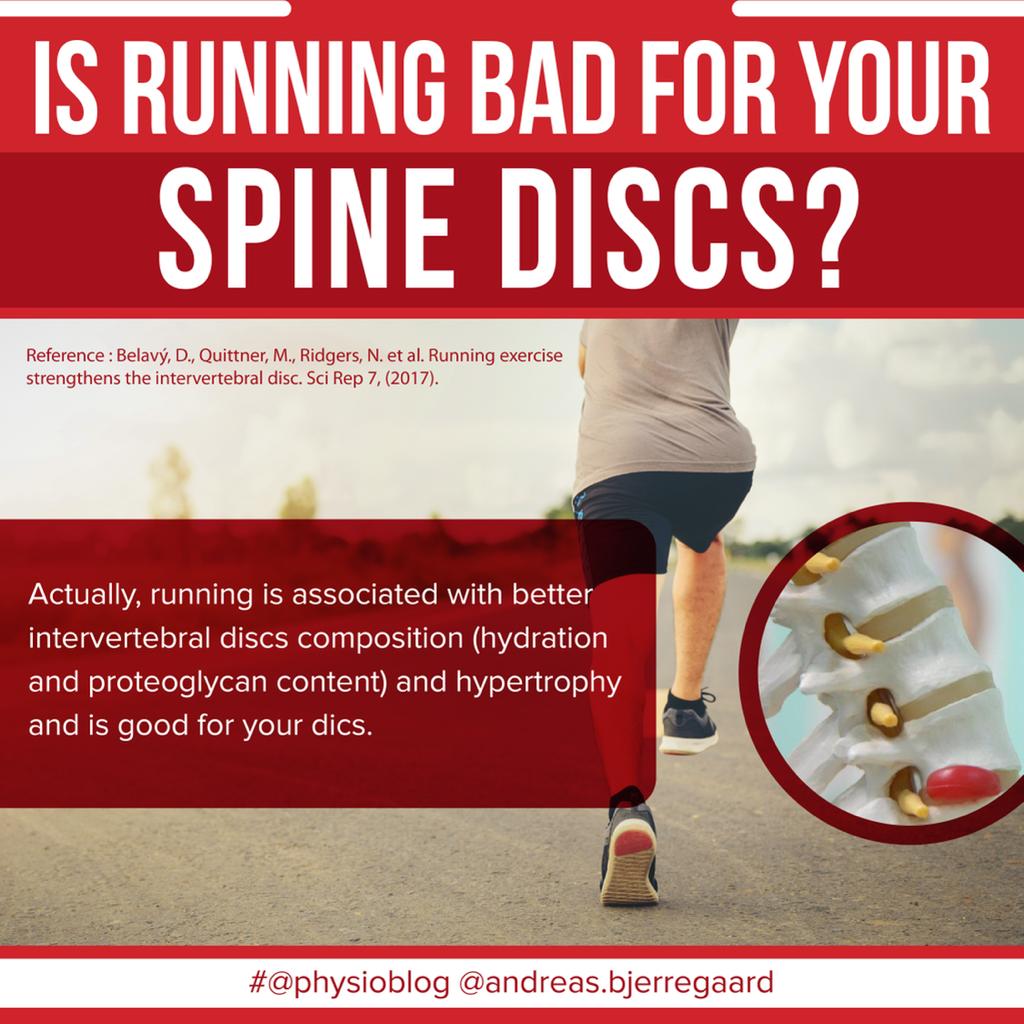 “There is currently no evidence that the intervertebral discs (IVDs) can respond positively to exercise in humans. Some authors have argued that IVD metabolism in humans is too slow to respond anabolically to exercise within the human lifespan. Here we show that chronic running exercise in men and women is associated with better IVD composition (hydration and proteoglycan content) and with IVD hypertrophy. Via quantitative assessment of physical activity we further find that accelerations at fast walking and slow running (2m/s), but not high-impact tasks, lower intensity walking or static positions, correlated to positive IVD characteristics. These findings represent the first evidence in humans that exercise can be beneficial for the IVD and provide support for the notion that specific exercise protocols may improve IVD material properties in the spine. We anticipate that our findings will be a starting point to better define exercise protocols and physical activity profiles for IVD anabolism in humans.”

We expect that tissues will adapt to loads placed upon them. For the intervertebral disc (IVD), little is known about what loading protocols are beneficial for IVD tissue and cause anabolism in humans. It is also not clear how long is required before the IVD might show a measurable adaptation to exercise, and we therefore recruited only people with a minimum of 5 years history at their current physical activity level: either no sport (referents), 20–40 km per week running (joggers), or 50+ km per week running (long-distance runners).

Our main finding was that long-distance runners and joggers showed better hydration and glycosaminoglycan levels (higher lumbar IVD T2-times13) than the non-athletic individuals. The effect of running in humans on IVD composition was most obvious in the IVD nucleus where intra-discal pressure increases with applied axial load are constrained by the ring-formed annular fibres. Beyond the compositional differences, there was evidence of IVD hypertrophy in the long-distance runners. The height of the IVD relative to that of the vertebral body, which serves as an internal control for body size, was greater in the long-distance runners.