Most of this blogpost is based on below study by Weakley et al. 2021. See all the references at the end of this article. 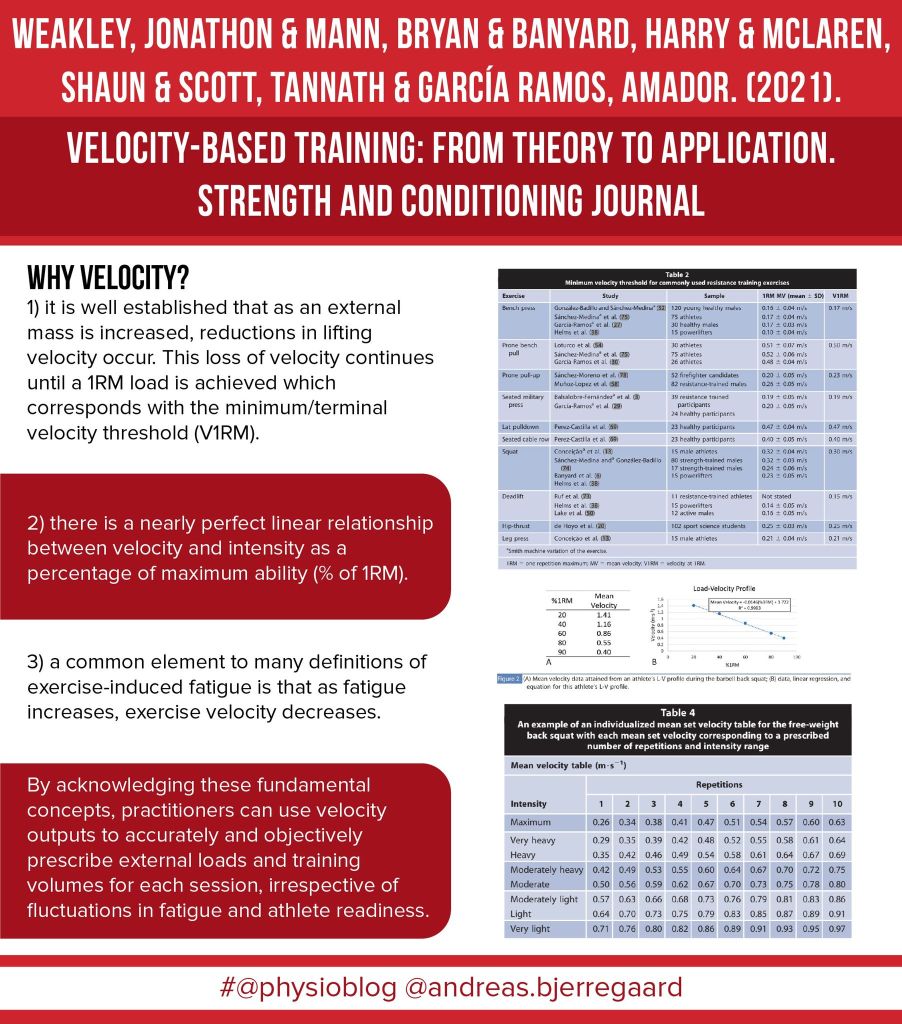 Athletes perform resistance training to develop strength, power, and lean body mass. To achieve this, the athlete or their coaches typically prescribe specific resistance training loads relative (%) to an individual’s maximal ability repetition maximum [1RM] based on the desired training goal. However, using an athlete’s previous maximal ability to prescribe training loads can be problematic if the athlete’s 1RM changes as a consequence of training because the prescribed load may not match the % of 1RM intended for the particular session or over a given period.

What is  repetition maximum (RM)

In 1945 Thomas Delorme described progressive overload for rehabilitated soldiers after World War II. The concept was when the 10 RM was determined, the increase in weight continued until 1 RM was found. For the following week the training load was 10 RM for 7-10 set (70-100 repetitions) for 5 days with 2 days off. After one week a new 10 RM and 1 RM was determined.

However, more recently, the notion of using training velocity to achieve specific performance goals has been gaining popularity in strength and conditioning training facilities and in the scientific literature (1)

WHAT IS VELOCITY-BASED TRAINING AND WHY SHOULD IT BE USED?

VBT is a form of autoregulation of training, where day-to-day fluctuations in performance can be accounted for by adjusting the training load. However VBT, is not the only autoregulatory training method, rating of perceived exertion (RPE)  and repetition in reserve (RIR) is properly the most known and used method for autoregulation for strength training and described by a coach and practitioner. However, the RPE and methods require the user to wait until a training set has been performed before any adjustments can be made. VBT can provide real time feedback during the set. There is a near-perfect linear relationship between mean velocity and %1RM.

It is known that the number of repetitions that can be performed with a given % of 1RM may induce different levels of effort and fatigue, therefore, VBT can also help identify proper training loads when fluctuations in performance occur as a result of physical stressors or life stressor, as accumulation stress can result in a decrease in performance. Stress is a condition with specific outcomes from nonspecific inputs, and VBT provides an option for the S&C coaches to select the proper loads in an attempt to prevent nonfunctional overreaching that potentially lead to decrease in performance or an increase in injury. As the mean velocity is a very stable metric and that there is a high positive correlation between the mean velocity of the barbell and % of 1RM, then mean velocity should remain quite stable even though the 1RM may fluctuate over time (1). Research has shown that day to day fluctuation ranged from 6-18% compared with a previously established 1RM. For example those athletes who were prescribed a load of 70% of 1RM for training may in actuality be lifting in a range of 52%–88% of 1RM. By using VBT to account for the daily variability in 1RM, theoretically it should be easier to hit the training target (1).

See a example in above table from (4)

Based on observation, experience, and existing research, these authors (1) believe that many coaches employ loads that are either too heavy or bar velocities that are too slow to maximize training effects. For example when the velocity of hang cleans was measured by attaching the linear position transducer to the bar, the authors found the mean velocity of the bar was between 0.6 and 0.8 m/s, far below the recommended 1.4 m/s velocity for this lift. Once this minimum velocity for the hang clean was achieved, a strong relationship between the lift and vertical jump was observed.

Improving results because of immediately feedback

Study by Randell (2) studied two groups of athletes participating in jump squats, one of which received velocity feedback at each session while the other received no feedback at all. The velocity feedback group significantly improved their jumping and sprinting ability over the non-feedback group. Same result was found by Keller et al. (7) who found better short-term and long-term effect of augmented feedback.

Another key aspect of VBT is to create L-V profiles to differentiate between normal variation in velocity.

It was observed that profiles created from two loads can be as reliable as those created from six loads, as long as the loads used are properly selected. It seems that a light load (about 40% 1RM) and a heavy load (about 80% 1RM) are the best options. However, if one of the two loads are not properly performed (if the athletes are not applying their maximal intended velocity), the results can be drastically altered. Therefore, we recommend performing between 4 and 6 sets with incremental loads to guarantee that the results are reliable.

Furthermore normative values for different lifts have been demonstrated by both Weakley et al (2021) (3) and Balsalobre-Fernández et al (2021) (4).

Although normative values can be used as quick way to estimate % of RM, Ormsbee et al showed that stronger, more experienced bench pressers have slower velocities at 100% 1RM which is probably due to their enhanced technical abilities with maximum weights and possibly a greater mental drive to maximal effort lifting. For example if a Athlete can squat over 1.6 x BWT tend to 1RM with a velocity of < 0.24 m/s a weaker squatter tends to 1RM at a velocity in the range of 0.30-0.40 m/s mark. However, the velocity scores at lighter %1RM (<80%1RM) may be similar. This was confirmed by the work of Helms et al. who found that average velocity scores best predict an athlete’s change in strength when the resistance used are > 80% of 1RM. Basically stronger squatters know how to “grind out” a maximum squat and therefore their 1RM velocities are lower. So to create an Individualized L-V profile no need to exceed the recommended 80% of RM.

When working with Force Velocity training I liked to use above tables and thinking of it as a linear relations and not a curve relationship. I also not use the velocity zone to explains my desired goal, but using basic science understanding from 1RM concept that you have to train at least 70% of 1RM to train strength. Then there is different desired target like strength, power, hypertrophy, muscle endurance.

In terms of meaningful changes in velocity, the smallest detectable difference in Mean velocity, Peak Velocity, and Mean Propulsive velocity for back squat has been reported to be +-0.06–0.08 m-s, +-0.11-0.19 m-s and 0.08–0.11 m-s, respectively. This suggests that if valid velocity measuring devices are used for monitoring, meaningful changes in velocity between training sessions are likely to reflect acute fatigue or gains in strength. Furthermore, it may also allow for the accurate prescription of resistance training load during training and across mesocycles (3).

Jidovtseff et al (2011) (5) looked at the reliability from three different bench press studies (see figure 2). González-Badillo and Sánchez-Medina (2011) (6) showed in 130 strength-trained males that even though strength increases over 6 weeks mean propulsive velocity (MPV) did not increase (figure 1). A close relationship between mean propulsive velocity (MPV) and % of 1RM was observed (R 2 = 0.98). Despite a mean increase of 9.3 % in 1RM from Test 1 to Test 2, MPV for each % of 1RM remained stable. Stability in the load-velocity relationship was also confirmed regardless of individual relative strength. These results confirm an inextricable relationship between relative load and MPV in the Bench Press which means that 1) evaluate maximal strength without the need to perform a 1RM test, or test of maximum number of repetitions to failure, 2) determine the % of 1RM that is being used as soon as the first repetition with any given load is performed 3) prescribe and monitor training load according to velocity, instead of percentages of 1RM or failure to RM.

In a study by Gonzales-Badillo et al. (2016) (8) looked at the relationship between velocity, effort, and fatigue, and the consequent training adaptations and time course of recovery from fatiguing and less-fatiguing workouts. The study investigated the effects of performing 3 set x 4 reps at 80% of 1RM with no more than a 20% velocity loss versus 3 set x 8 reps at 80% of 1RM with no more than 40% velocity loss for squats. The results were that jumping capabilities of the athletes performing the 3 x 4 workout were recovered within 6 to 24 hours. The results for the 3 x 8 group were not fully recovered at the 48-hour mark. This indicates that higher reps and large decreases in velocity within a set result in large increases in lactate and ammonia and makes it more difficult to recover from the resistance training session. However, all the studies on biomarkers talk about a delay in recovery in relationship to performance, and how it may interfere with other training sessions. So this is properly more related to in-season strength training where strength has to be planned in relation to matches and threshold of velocity loss during sets of squats can be set to 20% and 30% for upper body exercises. However, velocity loss within a set has less clinical meaning in rehabilitation or for the everyday lifter. HoweverSo to limit muscle damage and improve recovery while maintaining strength & power, limit velocity loss during sets of squats to 20% and 30% for upper body exercises.

There are several limitations of VBT.

1.VBT can be a valuable addition to quantifying our training or rehabilitation by either lifting slightly faster with the same weight or lifting heavier loads at the same velocity. Ideally you do both.

2.VBT can help identify proper training loads when day to day fluctuations occur as a result of physical and life stressors and thereby minimize the decrease in performance or the risk of injury by adjusting for the target optimal loading.

3.VBT helps identify optimal velocities and specific loads at which to train to enhance specificity of training.

4.VBT provides immediate feedback that can play a role in motivation to get the athletes excited and engage which can lead to improved performance. This can be by trying to lift faster than a former version of yourself: Beat your last session or for the last couple of months.

5.By introducing VBT we can emphasize the “Train smarter, not harder” with live feedback instead of relying on experience and observation.

6.VBT can lift the efficiency of training by tracking daily/weekly changes in strength, power and speed with real-time objective feedback directly to our phones where the data can be logged. Using data to track athletes over time and give information to the athlete and coaches.

Average velocity = the velocity score across the entire concentric or “upwards” portion of the lift and this has most relevance to typical “strength” exercises like squats, bench press, and other pressing exercises, deadlifts, pull-ups, rows, and so on.

Peak velocity = the highest velocity recorded in any small portion (eg. 5-msec) of the upwards portion of the lift and this has more relevance to “power” exercises.

Load = weight on the bar